Gorillas are ground-dwelling, predominantly herbivorous apes that inhabit the forests of central Africa depending on which species or subspecies. The DNA of gorillas is highly similar to that of a human, from 95–99% depending on what is counted, and they are the closest living relatives to humans after the bonobo and common chimpanzee.
In the wild, gorillas can reach an age between thirty-five and forty years, but under human care in zoos, they can reach an age of about fifty years. The oldest gorilla in captivity worldwide lives at the Colombus Zoo, a female called Colo who is currently fifty-five years old.
Gorillas are considered an endangered species due to the reduction of their population over the last decades. There are only about 250 individuals of Cross River Gorillas left, and less than 800 of Mountain Gorillas.
Reproduction 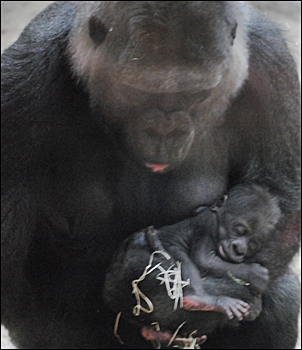 After eight and a half months, females give birth to a single baby or, very rarely, to twins. Gorilla infants are vulnerable and dependant, thus the mothers, their primary caregivers, are crucially important to their survival. Male gorillas are not active in caring for the young, but they do play a role in socializing them to other youngsters. The silverback has a largely supportive relationship with the infants in his troop and shields them from aggression within the group. Infants remain in close contact with their mothers for the first five months and mothers stay near the silverback for protection. Infants will suckle at least once per hour and will sleep with their mothers in the same nest.
Infants begin to break contact with their mothers after five months, but only for brief periods each time. By twelve months old, infants move away up to five meters from their mothers. At around eighteen to twenty-one months, the distance between mother and offspring increases and they regularly spend time away from each other. In addition, nursing decreases to once every two hours. By thirty months, infants spend only half of their time with their mothers. They enter their juvenile period at their third year which lasts until their sixth year. At the age of around 4 years, gorillas are weaned and they start to sleep in their own nest separate from their mothers. Finally, females mature at ten to twelve years old (earlier in captivity), and males at eleven to thirteen years old. Mature male gorillas are called silverbacks because of the silvery coat on their backs and legs.
Threats 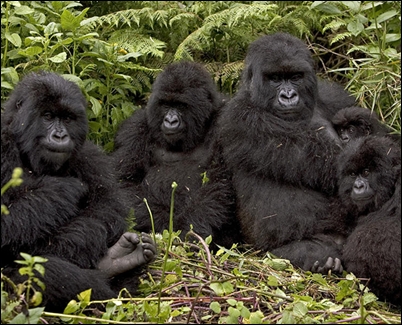 Gorillas are one of the most endangered species in Africa. For some subspecies (see below), there are less than 800 individuals remaining in the wild. Threats to gorilla survival include habitat destruction and poaching for the bush meat trade. In 2004, a population of several hundred gorillas in the Odzala National Park, Republic of Congo was essentially wiped out by the Ebola virus. A 2006 study published in Science concluded that more than 5,000 gorillas may have died in recent outbreaks of the Ebola virus in central Africa. The researchers indicated that, in conjunction with commercial hunting of these apes, the virus creates "a recipe for rapid ecological extinction". Today, the hunting of gorillas has decreased, but in the past many gorillas died during maneuvers for live captures of gorillas for zoos and circuses. Conservation efforts include campaigns such as the Great Apes Survival Project, a partnership between the United Nations Environment Programme and the UNESCO.

Habitat: Angola, Cameroon, Congo, Guinea and Gabon.
Description: They are the smallest of all gorillas species. They travel within a home range averaging from 7,8 to 47 square kilometres looking for food. In 2006, 125.000 more of them were found in Télé and Marantaceae.
Wild population: ~200.000 individuals.
Conservation status: endangered.
Captivity: The Western Lowland gorilla is the most common species in zoos with 848 individuals (as of 2011) in captivity worldwide.

Habitat: Virunga Mountains and Bwindi Forest.
Description: There remain just two populations of them, living in the Virunga area (Rwanda) and in Bwindi (Uganda), but since 1989 the number of mountain gorillas has increased. Due to the cold weather they have very long and black hair.
Wild population: ~880 individuals.
Conservation status: critically endangered.
Captivity: as it is very difficult to keep them in captivity, there is currently just a rescue centre keeping them (Senkwekwe): Ndeze, Ndakasi and Maisha.
G O R I L L A S

Habitat: The border area between Nigeria and Cameroon.

Description: They are now considered another subspecies since it was discovered in 2000 that they have different skull and tooth dimensions, and they are considered the most endangered species of apes in Africa.
Wild population: ~250 individuals.
Conservation status: critically endangered.
Captivity: the only known captive Cross River gorilla was a female kept at Limbe Wildlife Centre during 22 years till her death in 2016. Her name was Nyango.

Habitat: Mountainous forests of eastern Democratic Republic of Congo.
Description: They are considered the biggest primate species. They eat leaves, fruit, bamboo and insects. The grauer gorillas are endangered due to the destruction of their habitats and the illegal hunting and can be found living in groups of 5 to 30 members.
Wild population: ~2500 individuals.
Conservation status: endangered.
Captivity: there is just one gorilla of this subspecies in zoological institutions: Amahoro (Antwerp Zoo). GRACE (D.R.C) also keeps a group of orphaned and rescued gorillas.