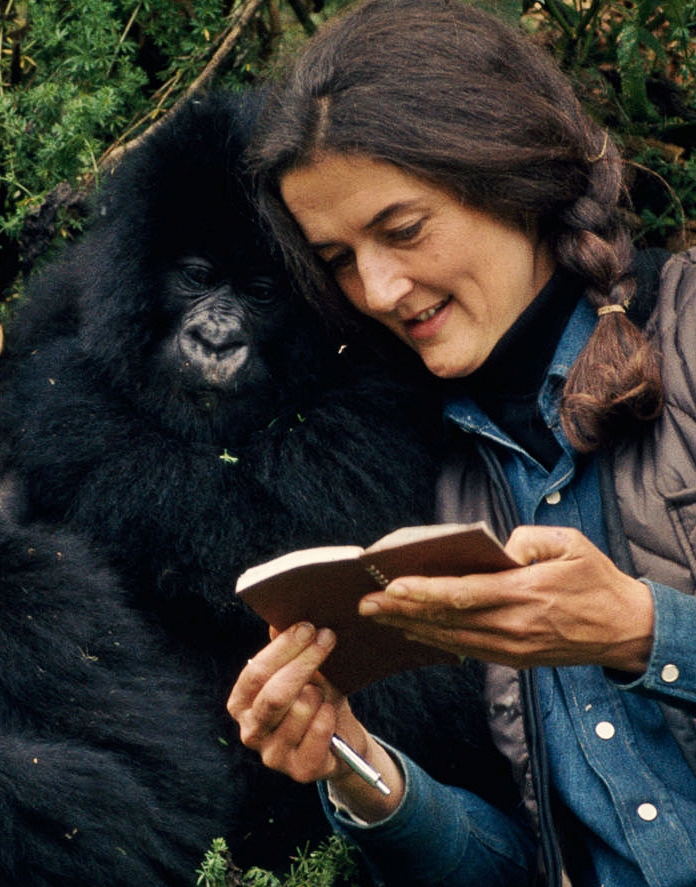 ABOUT DIAN FOSSEY
Born on January 16th 1932, Dian Fossey was an American zoologist who undertook an extensive study of gorilla groups over a period of 18 years. She studied them daily in the mountain forests of Rwanda. Considered as one of the foremost primatologists in the world while she was alive, Dian Fossey, along with Jane Goodall and Biruté Galdikas, was part of the so called Leakey's Angels, a group of three prominent researchers on primates sent by anthropologist Louis Leakey to study great apes in their natural environments. Dian devote her life to the study of primates. After traveling to Africa, she became fascinated with the lives and habits of the rare Mountain gorillas in the jungle of Rwanda.
Interest in Africa
In 1963, Dian Fossey borrowed $8.000 (one year's salary), and went on a seven week visit to Africa. In September 1963, she arrived in Nairobi, Kenya. She met actor William Holden, owner of Treetops Hotel, who introduced her to a safari guide, John Alexander, who became her guide for the next seven weeks through Kenya, Tanzania, Democratic Republic of Congo and Zimbabwe. The routes included trips to Mt. Mikeno in Congo, where, in 1959, the American zoologist George Schaller had carried out a study of the mountain gorilla. At Olduvai Gorge, Fossey met Leakey and his wife while they were examining the area for hominid fossils. Leakey talked to Fossey about the work of Jane Goodall and the importance of long term research of the great apes. Although she had broken her ankle while visiting the Leakeys, by October 16th, Fossey was staying in Uganda. Baumgartel, an advocate of gorilla conservation, was among the first to see the benefits that tourism could bring to the area, and he introduced Dian to Kenyan wildlife photographers Joan and Alan Root. The couple agreed to allow Fossey and Alexander to camp behind their own camp, and it was during these few days that Fossey first encountered wild mountain gorillas. 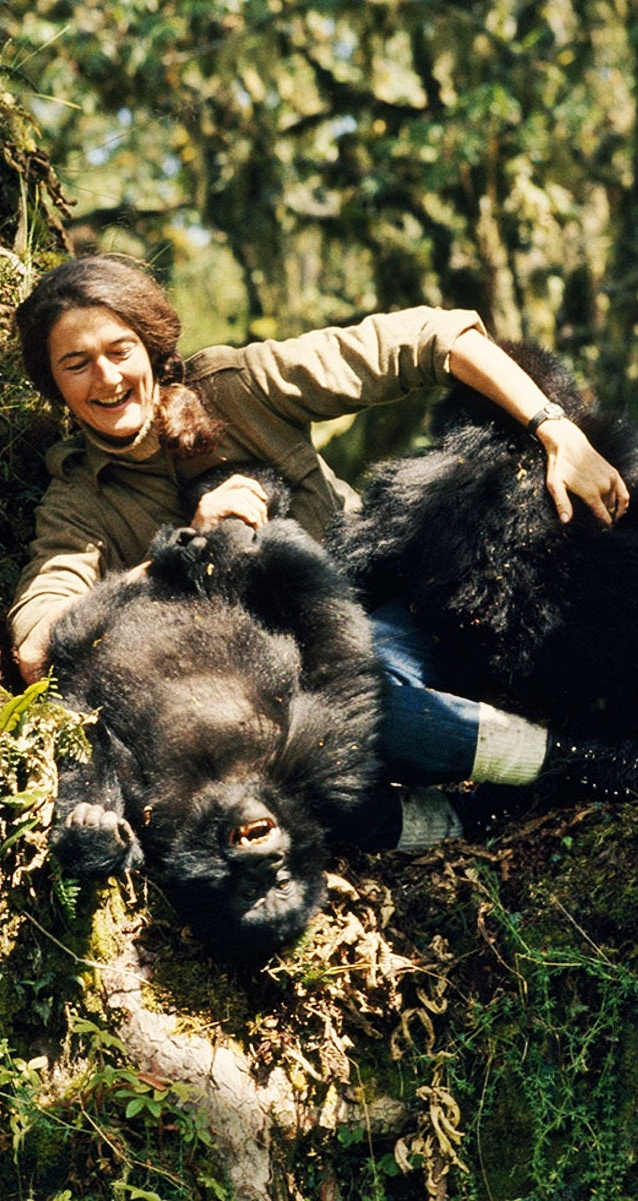 Digit Fund
In 1977, Fossey's favorite gorilla, Digit, was killed by poachers. He defended his group against six poachers and their dogs. Digit took five spear wounds in self defense and managed to kill one of the dogs, allowing the other members of his group to escape. He was decapitated, and his hands cut off for an ashtray. Fossey's group captured one of the hunters, who revealed the names of his accomplices, three of him were imprisoned. Fossey created the Digit Fund (Dian Fossey Gorilla Fund International) to raise money for anti poaching patrols and a consortium of international gorilla funds arose to accept donations in light of Digit's death and increased attention on poaching. Fossey opposed the efforts of the international organizations, which she felt inefficiently directed their funds towards more equipment for Rwandan park officials. 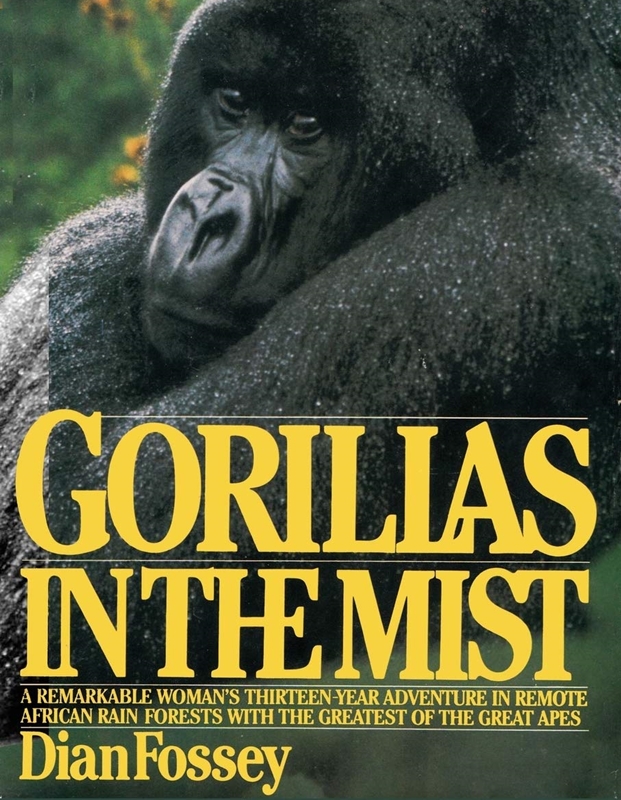 Gorillas in the Mist, the film
On September 23rd 1988, a drama called Gorillas in the Mist, directed by Michael Apted and based on Dian Fossey's life, was released to the cinemas. It tells the story of her work in Rwanda with Mountain Gorillas. Sigourney Weaver was the actress who played the role of Dian Fossey. The film was nominated for 5 Oscars at the 61st Academy Awards in 1988, including best film editing, best actress in a leading role, best music, best writing and best sound. The screenplay was adapted by Anna Hamilton from articles by Shoumatoff and Harold Hayes and a story by Phelan and Tab Murphy.
Dian Fossey's death
On a December 27th 1985 fateful day, Dian's body was discovered murdered in the bedroom of her cabin in Virunga Mountains. Her skull had been split by a machete, a tool widely used by poachers, which she had confiscated from a poacher years earlier and hung as a decoration on the wall. Fossey was found beside her bed, with her handgun beside her and her own hair pulled out in the hand. She was in the act of loading her weapon, but had picked the wrong type of ammunition during the struggle, of which the signs were broken glass and tables with other furniture overturned.
Fossey is buried at Karisoke, at a site that she herself had constructed for her deceased gorilla friends. She was buried in the gorilla graveyard next to Digit, and near many gorillas killed by poachers. Memorial services were also held in New York, Washington, and California. Fossey's will stated that all her money (including proceeds from the film Gorillas in the Mist), should go to the Digit Fund to finance anti poaching patrols. However, her mother Kitty challenged the will and won. 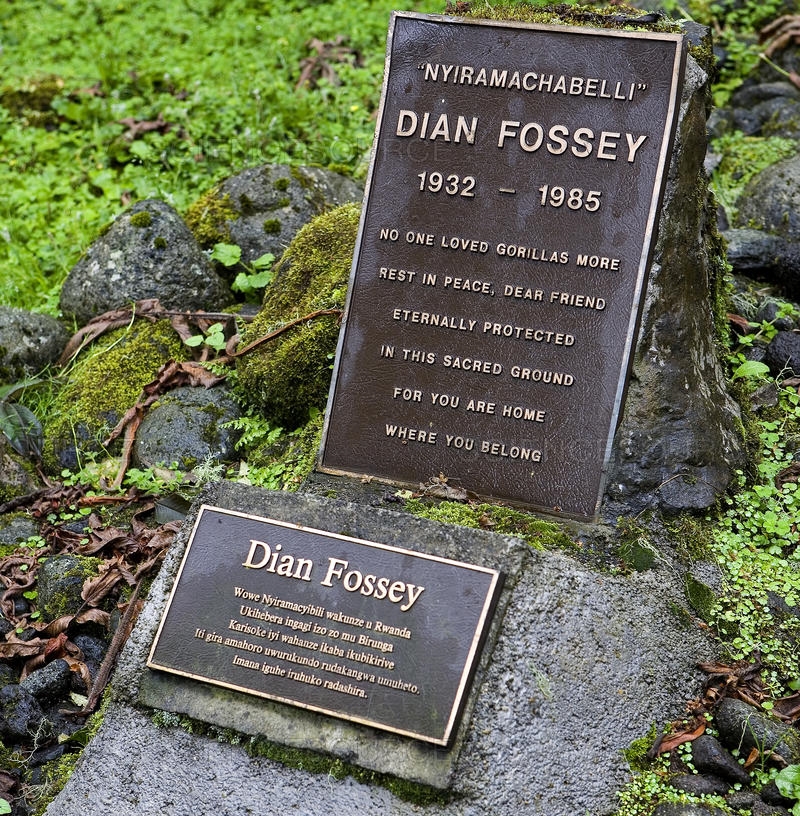 Dian Fossey was without any doubt one of the best gorilla defenders Worldwide, who died doing what she loved, protecting the mountain gorillas from extinction, and she will always be missed by the whole gorilla community. Dian's last entry in her diary read:
"When you realize the value of all life, you dwell less on what is past
and concentrate more on the preservation of the future."

In loving memory of Dian Fossey, Rest in Peace